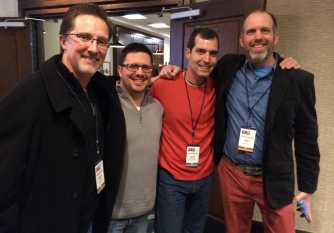 At Dad 2.0 Summit in New Orleans this past February. From left: me, Chris Read of Canadian Dad; Kevin McKeever of Always Home and Uncool; Whit Honea of the Internet. I spent an hour Tuesday rambling about baseball, storytelling and other things on Chris’ Creative Minds podcast.

One of the best things about publishing this online … whatever it is … journal, I guess … is the chance to develop friendships with people all over the world. One of my favorites is Chris Read of Canadian Dad.

Chris was kind enough to feature DadScribe on his Dad Blogs Exposed series about a year ago. And Tuesday, he was kind enough (again) to invite me to join him for an hour-long conversation on the Creative Minds podcast he produces with fellow Canadian Mike Reynolds of Puzzling Posts. Mike was out Tuesday attending to under-the-weather family members (get well soon, Mike’s family!), so it was just me and Chris.

Chris indulged my rambling about baseball writing and storytelling and parenting and other topics, and I enjoyed every minute. We name-dropped a few of our favorite fellow online writers and I made a few lame attempts at jokes about how Canadians occasionally add a “u” after an “o” in inappropriate places.

It was a good time, and I hope you get the chance to listen. Here is the link to the podcast, which is  also available through subscription on iTunes.

Thank you again, Chris and Mike, for the invitation. I’d love to do it again sometime.

As a child of the ’70s, I considered Han Solo the epitome of manhood.

Fiercely independent, yet secretly sentimental. Skeptical, but willing to believe in magic if he sees it with his own eyes.

Secure enough in his own skin to pursue a princess, but not above taking a wide-eyed farm boy under his wing. Best friends with a Wookiee.

A lovable scoundrel who poses as a mercenary, but who deep down recognizes the best things in life are free.

In short — the ideal dad.

I readily acknowledge that my exposure to Star Wars at a young age shaped the adult I have become. And while Obi Wan was a superb mentor and Vader achieved redemption in the end, it was Han Solo who taught me the most about how to be a good dad.

Here are just a few examples of why I believe General Solo, who had not fathered children with Leia Organa as of the end of Episode VI, still might be the finest father figure in the history of this or any other galaxy:

1. When the kids get difficult, use redirection.

(And if you must leave a mess for someone else to clean up, tip well.)

2. Trust your instincts. Even in the face of utter uncertainty.

3. If you don’t like what is being said, change the conversation.

(To be fair, Don Draper also teaches us this.)

5. Make a smile your default expression.

6. Learn to work with your hands.

(But if the bluff fails, know when it’s time to cut your losses.)

8. Give the kids room to succeed or fail — but a little help every now and then can’t hurt.

9. Never let them forget how much you love them.

This Coca-Cola commercial from Argentina is one of the best portrayals of early parenthood I’ve seen. This is not a sponsored post, but I felt compelled to share this because it spoke to me as a father of two young sons and it made me smile.

I hope it makes you smile, too. 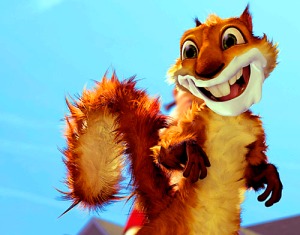 This is how most of America sees squirrels: tweaked out, hyper, incompetent, good for a laugh. This must cease, for the good of humanity and squirrelhood.

The negative and inaccurate portrayal of squirrels in American mass media and entertainment must cease. Consider this a rallying cry on behalf of our furry-tailed, tree-climbing, acorn-eating friends.

Your eyes are rolling. I can hear them. I know what you’re thinking. They are squirrels. They have been handed all of life’s advantages for eons. Why should you care whether a writer or filmmaker or advertising hack depicts a squirrel in an absurd and utterly unrealistic way to get a laugh or sell a product?

Because even though many squirrels do, in fact, live down to the appalling mass media stereotype, the vast majority of squirrels actually are competent, caring, engaged, hard-working rodents. Rodents who are tired of being made fun of as a group, just for the sake of a cheap laugh.

As Scrat from Ice Age proves, this is not a new problem.

Think it’s not a problem? Consider how squirrels have been depicted in children’s movies in recent years. Scrat from Ice Age? A tweaked out, acorn-obsessed addict who would rather chase a nut than avoid certain death in an avalanche. Hammy from Over the Hedge? Also tweaked out, particularly susceptible to the lure of caffeinated beverages, which are like squirrel amphetamines. One dose, and Hammy turns into a seething mass of hyperactivity and pure adrenaline. That’s just not realistic, and it has to stop. In the brilliant animated film Up, what do Dug and the rest of the talking dogs of the South America jungle get distracted by throughout the film? That’s right. Squirrel! They are merely a comic prop, good for nothing but a laugh. Squirrels demand equal screen time from now on. Or any screen time, for that matter. And not of them being tweaked out. Screen time of squirrels being squirrels, as they do. It’s only fair.

Even our preschoolers are not immune from negative stereotypes of squirrels. Witness one of our younger son’s favorite board games: Sneaky, Snacky Squirrel. Sneaky and Snacky? Why not just call the game Felonious, Gluttonous, Stinking Rodent and be done with it? Say what you really think, game makers. Show the true depths of your anti-squirrel bias.

Or, better yet, in all seriousness, why not call it Industrious, Athletic, Cute-as-a-button Yard Pet? Because that would be far more accurate and provide America’s youth a genuinely positive impression of our furry little buddies. Our children deserve to know the truth about squirrels. Their lifelong impressions are being formed now. It’s not too late.

Not every depiction is inaccurate or demeaning. Fortunately, the good people at Mary Baldwin College — home of the Fighting Squirrels — have it right. Here’s an excerpt from the school’s website, explaining why the squirrel was chosen for its school mascot.

“In heraldry the squirrel is a symbol of industriousness, trustworthiness, and preparation for the future. It also has been used to represent those with a love of the woods. In Nordic mythology, the squirrel is a symbol of the soul. These ancient meanings apply to Baldwin athletes who know that diligent work will pay off at game time and that their teammates depend on them — and equally apply to all Baldwin women (and men) who are disciplined in their focus, strive to do good in the world, work toward environmental sustainability, and seek wellness of body as well as soul.”

Now, that’s more like it! Thank you, Mary Baldwin College, for your squirrel-savvy depiction of our furry friends.

Yes. That’s more like it. Truly inspiring. Thank you, Mary Baldwin College. It is encouraging to see that someone, somewhere, understands the plight of the gentle, humble squirrel. Perhaps there is yet hope for the squirrel community, after all.