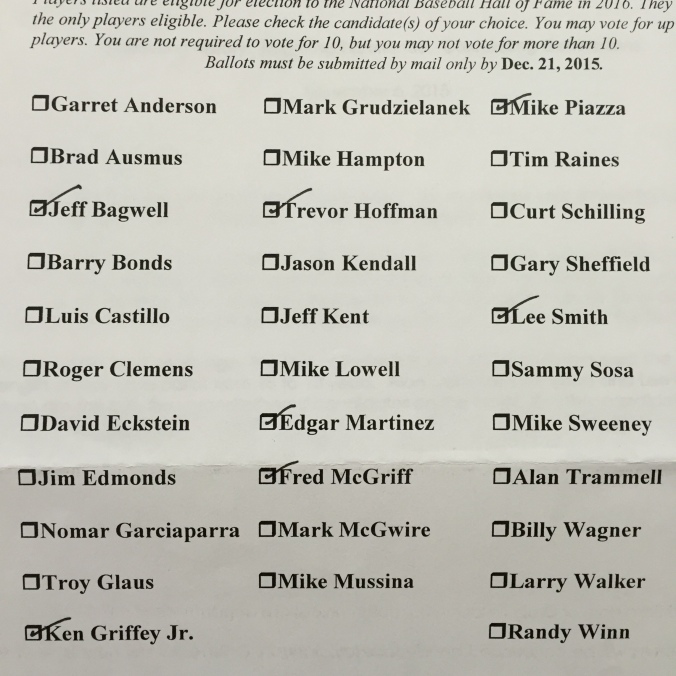 From the official Baseball Hall of Fame BBWAA Rules for Election – 5. Voting: Voting shall be based upon a player’s record, playing ability, integrity, sportsmanship, character, and contributions to the team(s) on which the player played.

I wish I had a cool Ken Griffey Jr. story to share. Naturally, I saw him play plenty of times, primarily against the (Devil) Rays. He actually was merely so-so in 42 games against Tampa Bay: batting average .231, on-based percentage .309, slugging percentage .444, and only nine of his 630 home runs.

Those mighty Rays, man. Giving Hall of Famers fits since 1998.

Putting the check next to Griffey’s name on the ballot was one of the easiest decisions I’ve made in my eight years as a voter. Simply, his career playing record and contributions to the Mariners and Reds warrant induction in the Hall of Fame. I don’t see much, if any, room for debate about Griffey, who was elected today along with Mike Piazza.

As always, I conducted my research. I’ll admit that was a much shorter process with Griffey.

I looked at his numbers on Baseball Reference, then checked his name on my ballot.

Similarly, I believe that Trevor Hoffman’s playing record and contributions to the Marlins, Padres, and Brewers made him a Hall of Famer. He became the all-time saves leader in 2006 and held that distinction until Mariano Rivera passed him in 2011. I checked Hoffman’s name not long after I checked Griffey’s.

Then I devoted a few minutes to each of the five holdovers from last year’s ballot, players I checked in December 2014 but who did not join John Smoltz, Pedro Martinez, Craig Biggio and Randy Johnson in the Hall. I found nothing to convince me I had been wrong about those five, so I checked them, too.

I was allowed to check as many as 10 players, but that’s where I stopped this year: seven.

Here are all seven players I checked this year (asterisk indicates holdover from 2014): END_OF_DOCUMENT_TOKEN_TO_BE_REPLACED